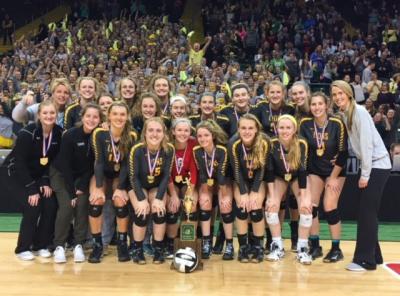 It was a dream come true for UPM’s own Danielle Reinert as the varsity volleyball team from Ursuline Academy trudged their way from Division 1 state championship.  Reinert, an inside sales representative, played for the school team from 2006-2009 under the guidance of beloved coach Jeni Case.  After college, she wanted to give back her time and encouragement to other students at her alma matter.  After working at the JV level, Reinert moved up to assistant coach of the varsity team, a position that was particularly special, as her younger sister, Lexi Reinert was also a part of the team and a senior this season.

The final match was played November 11 against St. Joseph from Cleveland, OH. The win came in a three-game sweep.  The Ursuline Academy varsity team record for the year is 28-1, winning the GGCL, districts, sectionals, regionals and finally, the state championship. Congratulations!